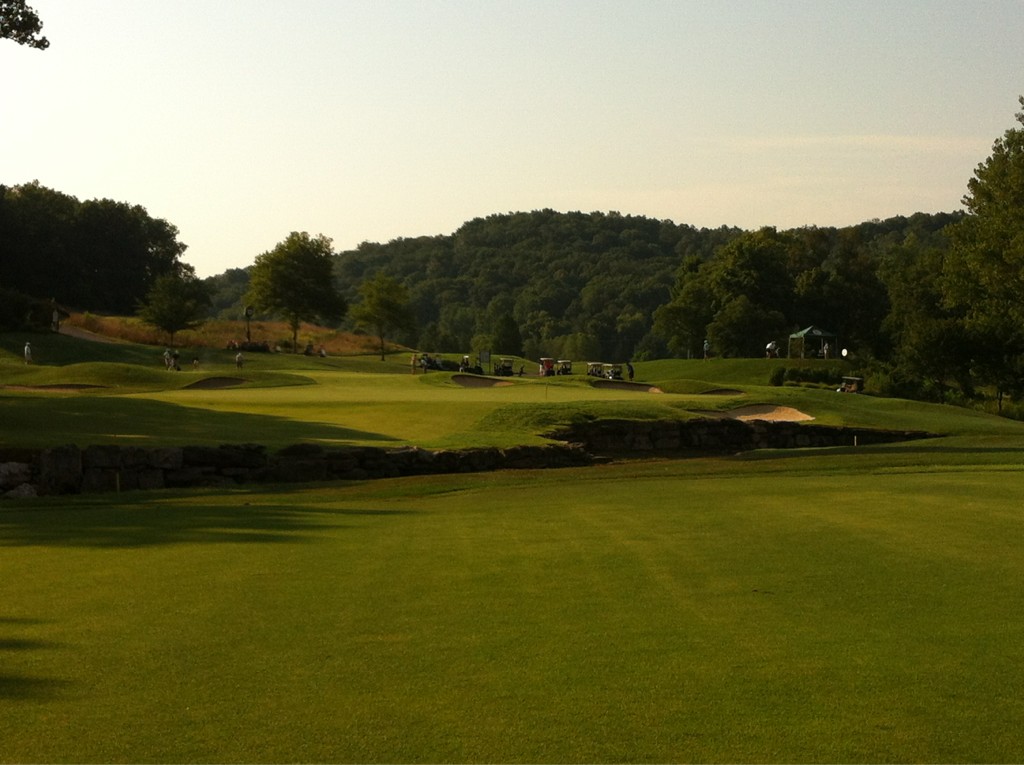 Score another one for the old guys. If it appears as if the older 50 crowd is making a serious statement in area competitive golf, it’s because they are flat out playing some great golf.

Players like Bob Gaus, Brian Fogt, J.C. Anderson, Mark Faulkner and Jeff Whitfield are just a few of the top ranked area golf professionals all over the age of 50. Area amateurs answer back with players like Scott Edwards, Tom Barry, Andy Frost, Andy Fogarty and Jeff Johnson. 50 is truly the old 40, or maybe even 30 the way these guys are playing.

The 2013 Gateway Cup Matches got underway this afternoon at The Country Club of St. Albans. The Gateway Section has owned the Amateurs the past several years after losing the inaugural rebirth of the annual contest featuring the areas top pros vs. the areas top amateurs. While today’s action only represents 25% of the available points, an upset could very well be in the making as the Amateurs hold a slim 4-3 lead heading into tomorrow’s Foursomes and Singles matches.

Chad Niezing and Jeff Johnson had the formidable task of going up against the Gateway Section’s top player in Bob Gaus and his partner, Rob Sedorcek. Niezing and Johnson squeaked out a 1up victory for the Amateurs.

J.C. Anderson, who will be teeing up along with Gaus at next month’s Sr. PGA Championship, was paired with Oak Brook’s Mike Suhre. Suhre was likely very familiar with one of his opponents, in fellow “East Sider”, Phil Caravia. Caravia, who was celebrating his birthday on Sunday, was partnered with Joe Migdal. Anderson and Suhre earned a point for the Professionals with a 1up win.

Ryan Roy and Gideon Smith made it a relatively stress free day in their defeat of Patrick Britt and Southeast Missouri’s Brevin Giebler. Given how well Britt and Giebler have played of late, it’s safe to assume they’ll come back strong on Monday.

Past Metropolitan Amateur Champion, Eli Grant, partnered with Brett Meeske for a 1up victory over Jeff Whitfield and Ty Zimmerman.

In a match that could have very well taken place twenty years ago, Nash Haxel and Mike Tucker defeated Andy Frost and Andy Fogarty 5&4. It’s remarkable how competitive all four of these players have stayed as they’ve gotten older and a true testament to golf being a game you can play for a lifetime.

The Captain for the Amateur side and the area’s most dominant amateur player for over the past decade, Skip Berkmeyer, partnered with Ted Moloney for a 2&1 win over Brian Fogt and JD Auping.

The only Amateur team to really create separation in their match featured a duo of Seniors in Tom Barry and Scott Edwards. Both former Metropolitan Amateur Champions defeated Bellrive Country Club’s Brett Moomey and Scott Brauer.

Foursomes will tee off beginning at 8:30am on Monday with Singles Matches scheduled to start at 12:00pm.  The full summary of results along with Monday’s pairings can be found HERE.