admin May 1, 2013 Comments Off on 18th Metropolitan Match Play at Old Warson CC 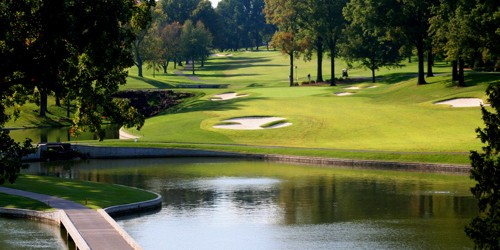 A successful season for an amateur golfer in the Greater St. Louis area often means the opportunity to start the following season in style at Old Warson Country Club as part of the Metropolitan Match Play Championship.

Skip Berkmeyer returns from a whirlwind experience at one of the top national amateur championships. Berkmeyer led the Coleman Invitational after two rounds but struggled in difficult conditions on a challenging Seminole golf course and wasn’t able to hold on. He’ll look to rebound this weekend on a golf course on which he’s very familiar and in a format he’s enjoyed unparalleled success.  Berkmeyer will face Thomas  Wuennenberg, a member of the University of Missouri golf team.  Wuennenberg averaged 77.8 in six competitive rounds this year for the Tigers and is coming off his best performance of the year at the Mizzou Intercollegiate finishing T18.

Bryan Bohme (8 seed) will meet Tommy Ponce (9 seed). Ponce is coming off a season where he qualified for a national amateur championship in the United States Amateur Public Links Championship. Ponce is a player on the Eastern Illinois University golf team where he recently finished 52nd in the Ohio Valley Conference Championship.  Bohme is coming off a consistent season, highlighted by a T8 finish in the Metropolitan Amateur Championship.

Ted Moloney (4 seed) is no stranger to this elite 16 player field. Moloney will face a fellow Greenbriar Hills Country Club Member in Mike Kendrick (13 seed). Kendrick advanced to the Semi-finals of the St. Louis District Championship before losing to Alex Cusumano 4&2.

Kevin Bell (7 seed) , a Junior at Rhodes College, will play Garrett Sneed (10 seed). Sneed attends McKendree University and is a high school graduate of Marquette High School. Sneed had a very active 2012 season earning points in a combined 6 tournaments highlighted by a T19 finish in the Metropolitan Amateur Championship.

In the final first round match, Dr. Andy Frost (6 seed) faces Mike Ehlers (11 seed). Ehlers, a member of WingHaven Country Club, is a member of the Central Missouri State University golf team. Dr. Frost will be the defending champion in a few weeks at the Normandie Amateur.

Interested golf fans can follow the action online HERE. Action gets underway on Saturday with the first match of Berkmeyer vs. Wuennenberg scheduled for 7:00am.
“By The Numbers”

2 – Westminster Graduates in the field of 16

2 – Marquette High School Graduates in the field of 16

2 – Bellerive Country Club Members in the field of 16

4 – Metropolitan Club Members in the field of 16